In early November, our Program Coordinators, Doni Crawford and Shikha Jerath, traveled to Atlanta, Georgia to attend the Facing Race Conference. Read on to find out more about their experience and to see photos from the event! 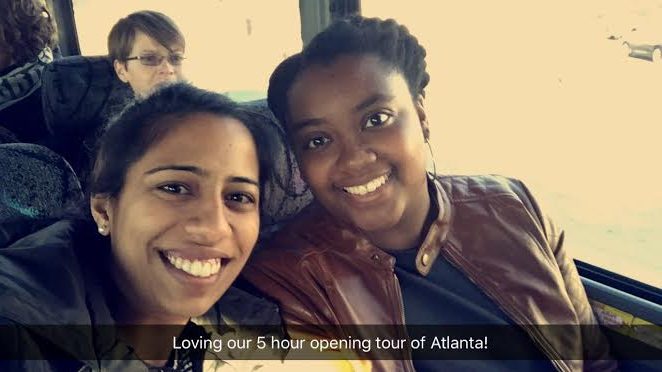 What is the Facing Race Conference?

Facing Race is a national biennial conference founded and organized by Race Forward: The Center for Racial Justice Innovation. It is the largest multiracial, intergenerational gathering on racial justice for organizers, advocates, educators, activists, creatives, and other leaders. The conference, intended for those who are working to build awareness of racial equity and identify solutions, included over 50 workshops and over 140 presenters. Over 2,000 people attended this year’s conference on November 10th-12th in Atlanta, Georgia.

What stood out to you during the conference? Why?

Shikha: The crowd was the most racially and ethnically diverse and integrated crowd of people I had ever seen. People with different races, ethnicities, sexual orientations, and abilities came together to talk about what matters most to them; I was inspired and very excited to be there. I am lucky that my co-worker, Doni Crawford, shared the opportunity with me and that Neighborhood Allies supports our learning and development through sponsoring our attendance. The conference arrived a critical time two days after a surprising presidential election and a turbulent election season. During this conference, I was looking to understand new roles and opportunities to serve our communities. Overwhelmingly, I found that intervening at the local level is the most accessible and possible step we can take right now. I am encouraged and reinvigorated about our work in communities.

Doni: Shikha and I attended a five-hour opening bus tour of Atlanta and the title of the tour, A Tale of Two Cities, mentally prepared me for some similarities between Atlanta and Pittsburgh. While the city itself is more racially and economically diverse than Pittsburgh, the harsh legacies of intentional disinvestment and residential segregation, and incoming displacement similarly plagued many communities of color in Atlanta. The conference sessions on equitable development focused on how we intentionally ensure that those communities benefit this time around and reaffirmed that we are on the right track here in Pittsburgh. Additionally, given that the conference was held two days after the Presidential Election, the results of the election were addressed by nearly every speaker and panelist over the three days. Many remarked that Facing Race was the perfect place to be in the immediate aftermath of such a contentious election cycle.

What are some lessons you are hoping to take to Pittsburgh?

Doni: While I’m excited to explore whether a couple intriguing equitable development strategies from Minneapolis and Boston would be feasible in Pittsburgh, there are also a few quotes that will have a lasting impact on me and continue to influence my thinking going forward. Michelle Alexander, author of “The New Jim Crow: Mass Incarceration in the Age of Colorblindness,” shared one of her favorite quotes by Audre Lorde with us: “The master’s tools will never dismantle the master’s house.” Alexander also pondered, “Is America possible? There’s nothing about justice that is inevitable.” Isa Noyola, a translatina activist, declared: “There is no time for hope. Hope is for those who can wait.” A panelist at one of my sessions said: “Communities should control their own resources. Why should our energy, water, infrastructure, etc. be controlled by people outside of our communities?” These quotes exemplify the big bold thinking that will help change this country for the better and I’m glad that I get to play a small role in ushering in that change through my work at Neighborhood Allies.

I was searching the Internet and read a lot of information on the website https://cialtad.com and it turns out that Cialis is now considered the best drug to enhance male potency. Due to heavy stress at work, I had problems with potency and with family life in general. I realized that I needed to do something, and the problems were already serious.

Shikha: One of the workshops that I attended, Changing the Big Story on Race, focused on ways to disrupt the dominant narrative–the most popular stories on race and ethnicity in journalism, news, documentaries, and other media platforms. Only two days after the election and a turbulent election session, this workshop could not have come at a better time. When telling stories, I learned that the purpose is not simply to tell it but to move a strategy forward. Rinku Sen, Executive Director of Race Forward shares, “we need to think about what kind of effect do we want to have on people who are listening to this story”. I also learned that one of the biggest pitfalls that we run into too often is telling stories of victimization resulting from an assortment of injustices and inequalities. We list the problems with the system without providing solutions or depict characters in our media as powerless. To change the dominant narrative, I learned that one effective strategy is to make sure that your story includes a protagonist that is powerful and part of the solution to a dysfunctional, unjust system.

Check out videos from the conference and some of our pics below! 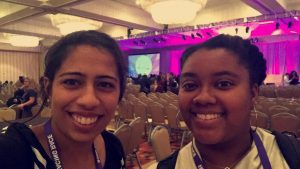 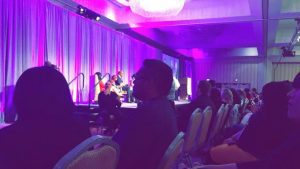