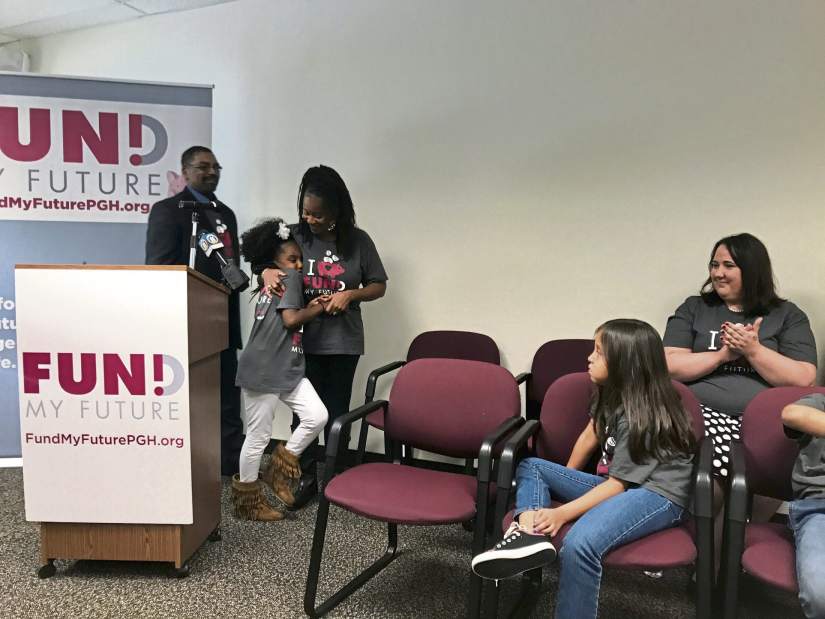 She started out small, making $1 weekly deposits through the financial literacy and college savings program that had just begun at Propel charter school in Pittsburgh’s Homestead neighborhood.

Kaitlyn, now age 9, soon decided to pitch in extra pocket money and her birthday and Christmas money, too.

Kaitlyn was among the first to participate in a nonprofit-backed program called Fund My Future, an innovative approach to cultivating financial literacy and instilling the importance of saving from an early age.

CHANGING THE WAY ‘A CHILD SEES HIS FUTURE’

“This initiative is a powerful one,” said Gainey, a Democrat from Pittsburgh’s East Liberty neighborhood who said he wished the program was around when he was in grade school. “It’s one that can change the way a child sees his future.”

The expansion means any child age 18 or under in Allegheny County — from newborns to teenagers — can now open a free savings account, win prizes for making deposits and, hopefully, learn critical financial literacy skills along the way.

“It gives them a base, it gives them a foundation of being able to learn fiscal literacy at a very, very young age,” Peduto said. “What we’re giving them is a sound foundation in order to be able to establish credit, to be able to then go further in life than what they would have to struggle through without that ability.”

More than 2,000 childhood savings accounts have been created across 13 schools since the program began in the Propel charter network in 2013, and officials hope to open at least 1,000 more next year.

— Propel Schools (@PropelSchools) October 27, 2017
Deposits have averaged about $5 each.

“Families have already made more than 20,000 deposits at Propel — not big ones, but they add up to more than $100,000, and we’re really excited not just with that the money that’s in the bank for them, but also with the changes in the way that they are talking about their future and their children’s future,” said Jeremy Resnick, who designed the expanded program as executive director of Propel Schools Foundation.

“We’ve shown that families want to save.”

Though city, county and state officials are endorsing the program, Fund My Future does not involve taxpayer money, Pittsburgh Councilman Dan Gilman pointed out.

“This is the first and the only program in the entire United States of America that provides every child an opportunity to a free childhood savings account without a single dollar of taxpayer money going into it,” said Gilman, D-Squirrel Hill.

Instead, the program is funded by direct payments from families, support from several nonprofit partners and contributions from major grantmakers in the region — including The Benter Foundation, The Buhl Foundation, Hillman Family Foundations and McAuley Ministries.

Children and their caregivers can make deposits using any bank or credit union — either through electronic transfers or going into a local branch — using existing savings accounts or 529 college savings plans.

“Since they can do it in school, it’s easy, convenient and fun because they can win prizes,” said parent Mary Trott of Clairton, whose 12-year-old son, Ian, opened an account in fifth grade.

“I think it’s good for my future, just to be sure I know what to do and saving it instead of spending it all the time,” Ian said. “I learned about how things work in life and how saving can help a lot in the future and stuff like that. It just helps you in the long run.”

Meanwhile, Pennsylvania college students graduate with an average of $28,000 in student loans and credit card debt of about $4,100, federal data show .

Peduto recalled opening his first bank account at Dollar Bank to have a place to put his paper route earnings when he was 7 years old in 1971, the year the Pirates beat the Baltimore Orioles in a seven-game World Series.

“I still have that same account,” Peduto told four children in the Fund My Future program on Friday. “I applaud you in your efforts of getting started today, because tomorrow comes really quick.”