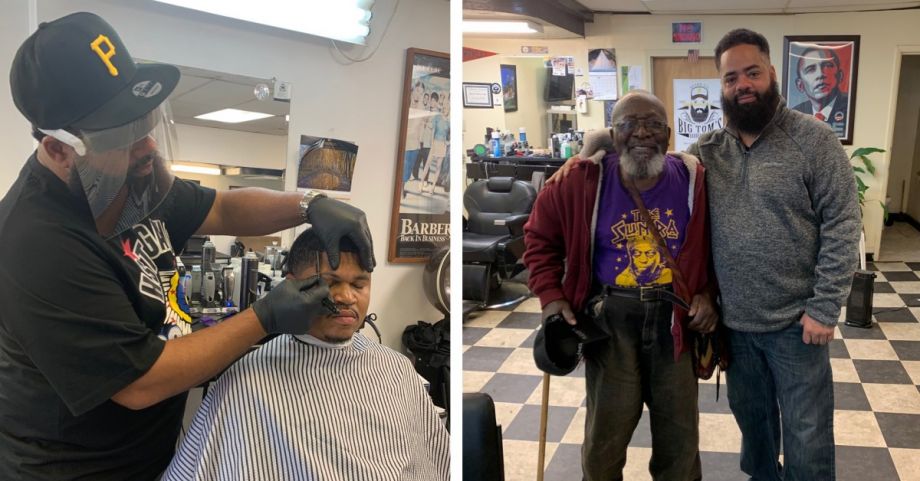 Thomas Boyd, owner of Big Tom’s Barbershop, plans to move from the space he’s been renting into a historic property in Pittsburgh’s Hill District currently owned by the city. Though he’s not a developer, he’s planning — with help — to renovate the two floors above into four units of affordable housing, and also create an outdoor community space next to the building.  (Photos courtesy Thomas Boyd)

At 2178 Centre Avenue, in the heart of Pittsburgh’s historically-Black Hill District, time has stood still for nearly a decade.

From 1971 to 2011, the building was home to Hamm’s Barbershop, a pillar of the community. Iconic barber Walter Hamm and wife Janice Hamm owned the building.

“I went there as a child,” says Thomas Boyd, a lifelong Hill District resident. “I looked up to Mr. Hamm.”

The barbershop closed after Mr. Hamm died unexpectedly in 2011. Mrs. Hamm sold the building to the Urban Redevelopment Authority of Pittsburgh. It’s one of 170 vacant or idle properties the agency owns along the Centre Avenue corridor, once a vibrant commercial and cultural hub, playing host to jazz legends and Black cultural icons from around the country.

Meanwhile, Boyd grew up to become a barber himself. He cut his first client’s hair at age 14 — a friend who couldn’t afford to pay for a haircut before the first day of school. He’s been a professional barber since 1996, and in 2005 opened Big Tom’s Barbershop. It’s become a Hill District institution in its own right, with clientele coming from the neighborhood and as far as West Virginia or Ohio — “Drug addicts, attorneys, professional athletes, preachers,” Boyd says.

Earlier this year, the Urban Redevelopment Authority’s board voted to enter exclusive negotiations with Boyd to buy the property at 2178 Centre Avenue. He’s planning to relocate Big Tom’s from the space he’s been renting, renovate the two floors above into four units of affordable housing, and also create an outdoor community space next to the building.

It’s still not guaranteed at this point that Boyd’s vision will become a reality. He’s still many months away from securing the financing required to acquire and rehab a property that’s been vacant for nearly a decade. But the Urban Redevelopment Authority is already using this transaction as a model for supporting community-led and community-owned revitalization of Black commercial corridors in other parts of the city.

“It’s a lot more to the process than I thought it would be,” says Boyd. “But they made it a little bit easier, and there’s been a lot of groups trying to encourage and help people get through it.”

When it comes to development in Black neighborhoods, cities across the country still have a tendency to favor larger, wealthier, usually white developers. Race isn’t officially the reason given any more, but the preference for developers with deep pockets and established track records ends up perpetuating a history of harmful patterns.

In Minneapolis, Belt Magazine recently reported on the city and a predominantly-Black neighborhood at odds over the exclusive development rights for a former shipping terminal given to a development team of wealthy, white-led companies.

In Indianapolis, groups working to preserve the Indiana Avenue Corridor’s history as a hub for Black business and culture are now battling against a large, white-led development company looking to build an apartment complex along the corridor for mostly white college students.

In St. Louis, residents of the predominantly-Black north side have long fought for years with wealthy white developer Paul McKee over the notorious “NorthSide Regeneration” project. City officials told the St. Louis Post-Dispatch last year they would do development differently moving forward.

Pittsburgh and the Urban Redevelopment Authority have their own contentious development histories — including right here in the Hill District, where in 1961 the city bulldozed 95 acres to clear the way for a new hockey stadium. It was a textbook case from the era of Urban Renewal, or, as James Baldwin called it, “negro removal.” Some 8,000 people and more than 400 businesses were forced out, with little to no compensation. The rest of the neighborhood, cut off from downtown, never really recovered.

Attempting to do something different, the Urban Redevelopment Authority and the City of Pittsburgh recently announced the “Avenues of Hope” initiative, which includes a handful of projects already in motion, including the Centre Avenue Corridor work. In a press conference announcing Avenues of Hope, Mayor Bill Peduto put an emphasis on going directly to communities to lead development work.

“Instead of looking for developers to do it, what if we asked the community to do it themselves,” said Mayor Peduto. “This idea was borne by the community-based organizations and community development corporations of Pittsburgh. Their leaders have been calling for this program for years.”

Easier said than done. The Urban Redevelopment Authority first issued a request for proposals to develop 170 properties it owns along the Centre Avenue Corridor in March 2018. It was expected to generate responses from the community, but nothing came of it.

The authority started meeting with community members to understand why. Those discussions quickly centered on the 27-step process of responding to a request for proposals.

“When we went to the community and we started walking through those 27 steps, folks in the audience started raising their hands and saying ‘wait a minute,’” says Diamonte Walker, deputy director at the Urban Redevelopment Authority. “An RFP [response] costs about $8,000 to put together. Nonprofits cannot spend $8,000 on that. A barber is not going to have $8,000 to put together that book.”

Walker says they took out about half the steps, including some of the most intense documentation required, like a full project budget. Instead of an analysis of the project’s financial capacity, they’re asking instead for the respondent’s financial capacity. They also removed what the Urban Redevelopment Authority calls a “p4 narrative” — a document that requires developers to go through 12 different measures for community benefit and explain how their project will contribute to each.

In the summer of 2019, the Urban Redevelopment Authority re-issued its request, instead calling it a “request for qualifications,” for developers interested in one or more of its 170 Centre Avenue Corridor properties. The Urban Redevelopment Authority also brought in the local nonprofit Neighborhood Allies to provide one-on-one support for respondents as needed. Some sought out more support than others, says Zak Thomas, one of several consultants with Neighborhood Allies who worked closely with Boyd on his response materials.

Each respondent also had to present their vision to the community before being selected, giving residents a chance to score each project based on its alignment with existing community-driven development plans.

“I think the Hill District is unique in that it completed a community-driven master plan in 2011,” says Marimba Milliones, executive director of the Hill District Community Development Corporation. “Then we followed up at Hill CDC with the Centre Avenue development redesign plan in 2015. It’s really important to understand the amount of planning and groundwork that was laid in the Hill District for us to be able to move into the implementation phase of those plans.”

Eleven teams presented their plans to the Hill District in November 2019. Boyd’s was one of multiple proposals that included 2178 Centre Avenue.

“I was very nervous about all of it, even though I knew a lot of people in the room,” says Boyd.

“Now that we’ve figured out the process, it’s replicable, and that’s where Avenues of Hope started to take shape,” says Walker. “We’ve learned a lot through the Centre Avenue process. We now know there’s a different way to do this and we’ve seen six Black developers getting ready to take on six publicly owned sites and redevelop them for their neighbors’ benefit.”

The pandemic has delayed everything — Big Tom’s had to shut down for three months. Originally, the exclusive negotiation period for the six first-round Centre Avenue corridor properties was for six months, but in July the board of the Urban Redevelopment Authority voted to extend that period another six months, till January 2021, due to delays related to COVID-19.

It hasn’t all been setbacks. At that same July board meeting, the Urban Redevelopment Authority awarded $50,000 in matching funds to Boyd’s project, which combined with $50,000 from Neighborhood Allies will pay for the pre-development architectural work and engineering analysis required to apply for basically every development subsidy they can find — state tax credits and state community development funds, as well as some local funding for affordable housing, to name just a few.

“There are a lot of different sources and we’re reviewing them all and we’re cautiously optimistic that we’ll get enough to make the project work,” says Thomas. “It does require us to go after every single one.”

The reliance on subsidies means exposure to the possibility of steep budget cuts in the wake of the COVID-19 recession. But as perilous as it seems, the subsidies and the land owned by the city or Urban Redevelopment Authority may be the last remaining hope for community-owned or community-led development in Pittsburgh’s Black neighborhoods, as speculation has already begun.

T.J. Bogdewic is CEO at Bridgeway Capital, a community development loan fund serving the Pittsburgh area. “Hypothetically, let’s say a property appraises at $200,000, you go to the property owner and say the business owner wants to buy the property for $225,000, and we have seen situations where the owners come back with astronomical dollar amounts, like they wouldn’t sell for less than a million,” Bogdewic says.

“Landlords in a lot of cases are just content to collect the rents that justify the appraised value and hope that sweeping development comes to [Black] neighborhoods like Hazelwood and they get the big payday someday,” says Bogdewic.

Looking further down the road, Milliones at the Hill District Community Development Corporation sees even more possible peril. For Milliones, community-owned development means something deeper than just a local Black-owned business owning the building it’s in. She’s thinking about a few years from now, as property values rise, will business owners be tempted tomorrow to cash out on properties that they acquired today?

“It’s not community ownership if somebody can sell it in three years,” says Milliones. “Think about it, a lot of folks, they will, as the neighborhood gentrifies. We have been pressing for [covenants or deed restrictions] hard. I’ve been doing this work long enough for me to be emotional about it.”

Milliones has been pushing for projects that have any public subsidy to require a community-based group receive at least a small ownership share or right of first refusal, to guard against that kind of loss. The Hill District Community Development Corporation is in the process of standing up a community land trust to play that kind of perpetual community ownership steward for the neighborhood, for commercial properties as well as residential.

“We need to figure those pieces out,” says Walker at the Urban Redevelopment Authority. “We don’t want to support profiteering or gentrification in any respect.”