Our Grants At Work On the Ground | Hilltop Property Stabilization Coordinator 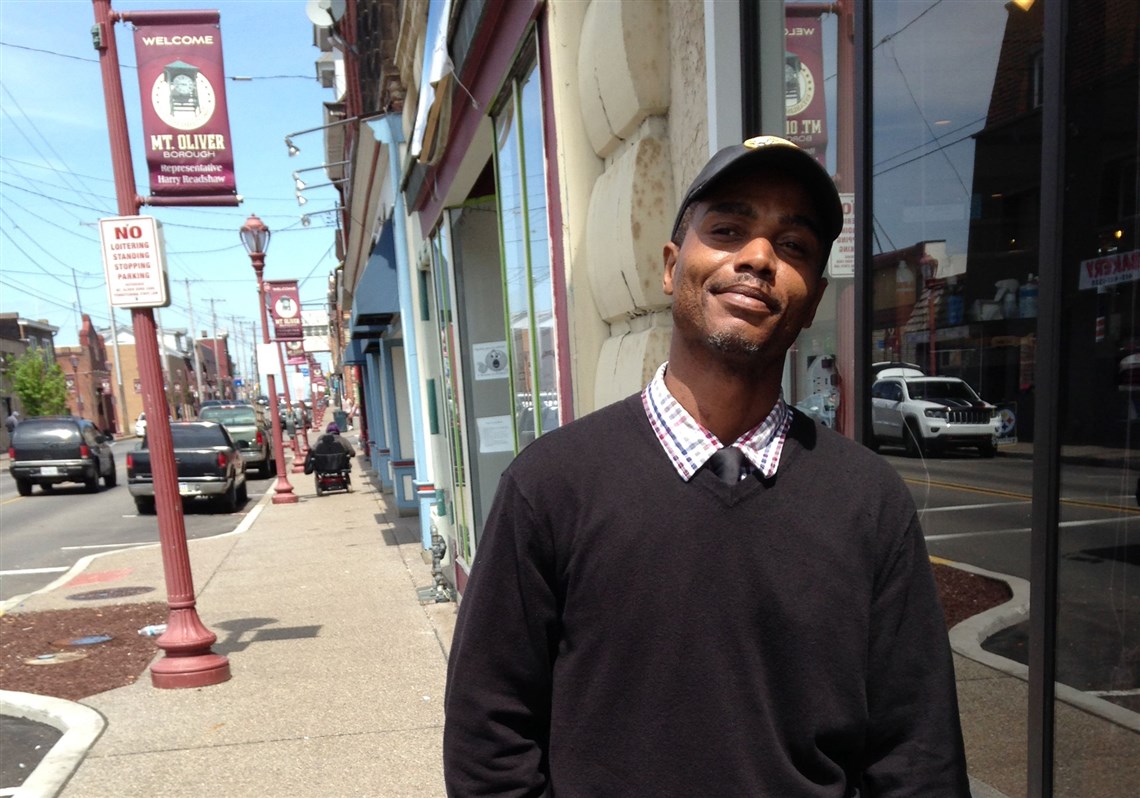 One day in District Judge Gene Ricciardi’s South Side courtroom, a defendant was explaining his problems correcting a property violation. Several seats away, listening, a young man leaned forward during a lull in the conversation and handed the defendant his business card.

In barely five months on the job, Mr. Blankenship has put his card in the hands of 60-70 people through an unusual outreach that includes the McGinnis Barber Shop in Mount Oliver Borough, where he gets his hair cut, and other hubs of activity in Mount Oliver and the 11 city neighborhoods in the Alliance’s sphere.

He also tools through the city’s Building Eye website to see what hilltop properties have been cited, then he knocks on doors. Judges Ricciardi and Richard King refer people to him, as do Pittsburgh City Council members and community organizations that belong to the Alliance.

Mr. Blankenship is a boilermaker whose work had slowed a few years ago, so he began getting active in his Knoxville neighborhood’s block watches.

“I looked at my children and decided to do something where I lived,” he said. “I started a grassroots organization, Unified, with three other guys. I started reaching out to organizations to do job skills training, and I’m getting ready to work with the Mad Dads on street patrols. We’re going to work on a series of block watch parties this summer.”

Four neighborhood groups got together to form the Alliance in 2009. Now with a staff of seven, it advocates for businesses, creates and preserves green space, works on street beautification and public safety projects and helps homeowners improve their properties.

“My first win was getting a woman a three-month extension from a magistrate,” Mr. Blankenship said. “There was another woman who owned a property in Arlington. She was elderly and had a lot of stress from problems she couldn’t address.”

She and her husband had lived in the property until he died, and now she lives in Bridgeville, he said.

“We connected her to a contractor who boarded up her property,” he said. “Then I contacted the inspector and asked him to look at it and make sure the city was satisfied, and they dropped the case because the problem was abated.”

In another situation, Mr. Blankenship learned about a property cited for overgrowth and referred the owner to a contractor before she was taken to court.

“We try to be proactive because when they start getting letters it becomes a worry,” he said. “I’d say 60 percent of these cases involve older people. The rest is just problems people have in average, everyday life without enough to pay a contractor.”

Aaron Sukenik, executive director of the Alliance, said Mr. Blankenship’s position was funded by a one-year grant from Neighborhood Allies.

“Roy is from Knoxville and showed an interest in this sort of work,” Mr. Sukenik said. “He can build his skills working with us so he can go on [to another job]. It’s been a great outreach expansion.”

The Alliance’s property stabilization work began four years ago when staffer Tim Dolan amassed data to track and monitor properties failing the city’s standards. The purpose was to act as code-enforcement intermediaries and help those property owners get some relief, Mr. Sukenik said.

The Alliance has worked with owners of about 400 properties in those four years, with funding from the city’s community development block grants, he said.

“There are a lot of low-income homeowners who get punitive fines and they can’t do anything about it,” he said. “It doesn’t solve the problem. We knew intervening was the best way.”

Mr. Sukenik cited a model example of the value of the outreach.

“Roy connected with a single mother who had plaster issues in her home and [Children, Youth and Families at the Department of Human Services] was telling her she had to get it fixed in order to have a safe environment for her children. As a result, CYF now considers us a resource, a reference. That’s a happy ending. Unfortunately, that fund is small — $14,000 — and we are constantly looking to recapitalize it.”