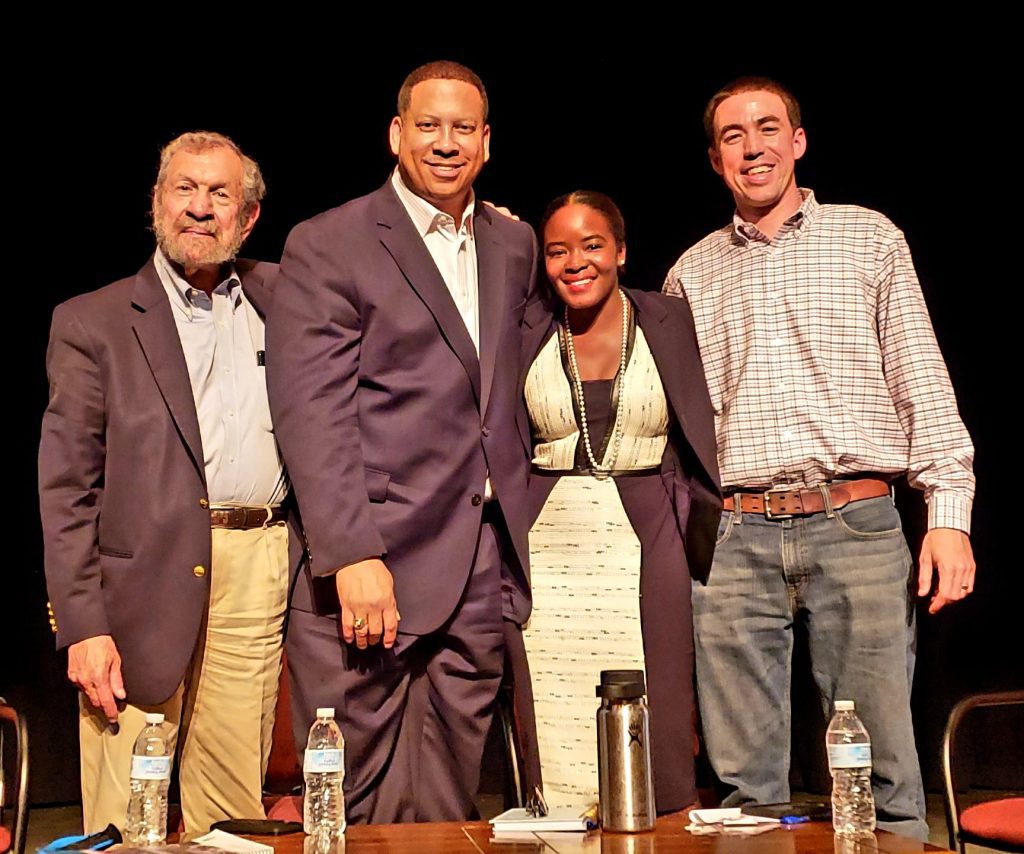 YOUNGSTOWN, Ohio – By many metrics, the revitalization efforts in Youngstown have been successful. Downtown is regaining its vibrancy, large development projects have gotten underway in recent years and crime is dropping.

But the success isn’t being felt by all. It was that segment of the city that was the focus of the City Club of the Mahoning Valley’s “Views & Brews: Revitalizing Youngstown” discussion Tuesday night.

“Although we really see a lot happening downtown and in the corridors, there’s still some issues with poverty, crime rates and inner city states,” said Lynn Bilal, the organization’s project director. “We are listening. We hear what you’re saying about issues happening around development we see and hopefully they can have ideas about what can be done and how we can reframe revitalizing Youngstown.”

What could most impact the revitalization of Youngstown, especially beyond the central business district and major corridors, is the creation of stable, well paying jobs, the panelists agreed.

“Half of the adult men in the city of Youngstown are unemployed, but when we look at stats from the [Youngstown/Warren Regional Chamber], they say there are 15,000 unfilled jobs in the region,” said Beniston before the panel. “Clearly, there’s a challenge we all need to work together on.”

Mallach noted that he found a vast majority of people working within Youngstown city limits earning more than $40,000 per year live outside the city.

“It’s about quality of life. It’s about making neighborhoods that people want to live in,” he said during the discussion. “Youngstown can build its human capital, whether it’s through workforce development, better education, giving kids an opportunity to succeed, giving adults a shot at jobs that exist.”

Developing that capital, the three said, comes in turn from investing in education and job training programs. Gillespie, whose Pittsburgh-based organization works in lending, networking and consulting for community improvement efforts, pointed toward the implementation of a “birth-to-career talent pipeline” that readies students for jobs that are today either on the cusp of breaking out or nonexistent.

“There are still a lot of new types of jobs ­– robotics, driverless cars – that we need to think about and prepare our workforce for,” he said. “There are a lot of jobs in medical centers and many of those jobs don’t require a college degree. We need to promote kids getting vocational training. … Youngstown needs to start building that pipeline and figure out how to rebuild the workforce as, hopefully, jobs begin to emerge.”

For those jobs, Burnett also pointed out the need to change the conventional thinking on job requirements such as soft skills and background checks, which are often tilted against poorer and minority workers.

“I think we’re asking for sometimes unreasonable skills for these wages. I don’t need you reading Nietzsche if you’re cleaning toilets or flipping burgers. I think it can be coded for keeping people out,” she said. “A person isn’t defined by the worst thing they’ve done. They deserve second chances.”

Gillespie further emphasized the importance of aligning resources, noting the impact that anchor institutions such as Youngstown State University or Mercy Health-Youngstown could have on education or entrepreneurs.

“They buy so much,” he said. “Think of what it could mean to an entrepreneur who’s one contract away from making it.”

Burnett also pointed to crowdfunding and local investing as a source for entrepreneurs in urban areas. Many capital investors or government efforts look to neighborhoods that are already considered up-and-coming rather than someone who may be the first to try something in their neighborhood.

“They’re going to invest where they see quick returns on investments, which is often in downtowns,” she said. “We forget sometimes the power of 20 bucks. That’s not going to revitalize a neighborhood, but a lot of it is equity or something that says ‘This neighborhood is important.’ ”

Both she and Mallach also noted the alignment of public resources toward education and community services. Mallach said that since they were built, the three current sports venues in Cleveland – Progressive Field, FirstEnergy Stadium and Quicken Loans Arena – have cost the city, Cuyahoga County and the state more than $800 million in construction, maintenance and upgrades.

“If you can spend $800 million on arenas, it’s not about money. It’s about will,” he said. “It’s about focusing on an agenda and getting whoever has the power to implement that agenda, whether politicians, corporate leaders or the heads of anchor institutions, to agree to focus the same energy on changing the ground rules for what happens in neighborhoods, job training and education.”

Added Burnett: “We continue to tell people in social and community service programs that there’s no money for them. We need to invest in programs. We have to think about a redistribution of things that have real impacts on real people.”

A friend of mine said that he started taking the pills to enhance sexual activity and his wife loved it. Personally, I have no problems with sex, but the curiosity took over. I asked a friend for one pill, I read on https://viasilden.com that you can take half a pill within half an hour before sex. I will omit the details, but my wife and I were pleased. Everything lasted a little longer. However, I felt a surge of blood in other parts of the body.

While efforts such as the opening of the DoubleTree by Hilton hotel in downtown and the growth of Youngstown State boost the city overall, there’s still work to be done in the poorer parts of the city that haven’t seen the same dividends. Mallach pointed to three areas that matter most to people in such areas: good housing, stable jobs and access to good education for children.

“It’s a long, hard slog city by city, town by town, region by region,” he said. “Without strong leadership, this can’t happen. We all have power but that’s, most of the time, latent. It has to be activated so you can get leadership that’s responsive, capable and committed to change.”