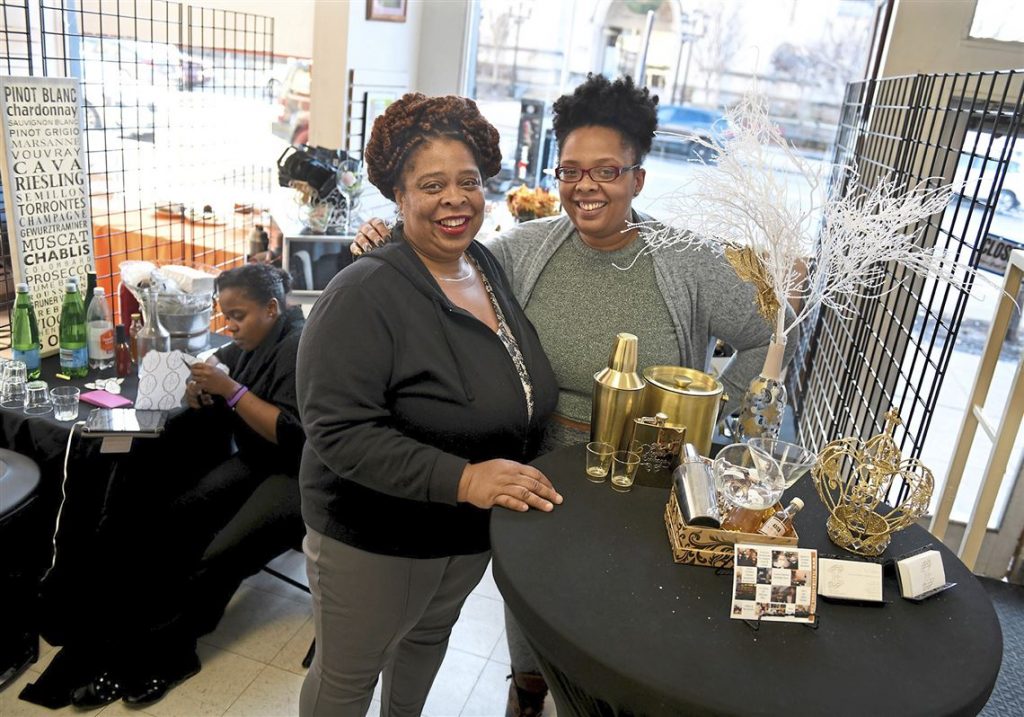 Tyleda Worou will graduate Monday night with a dozen other fledgling entrepreneurs in the first cohort from the retail incubator Catapult: Startup to Storefront. But the “real world” that confronts typical graduates will not be quite as cold for them.

Mentorships will continue, and the Gallery on Penn in East Liberty, where the graduation will be held at 6 p.m., continues to foster three in the first cohort as they grow their businesses in 10- by 10-foot nooks of cheap rent and camaraderie.

Most of the entrepreneurs in the cohort are women who sell online. Gallery, at 5935 Penn Ave., beside the Kelly Strayhorn Theater, is a triple storefront that opened in November for those who were game for bricks-and-mortar businesses but not flush enough to pay East Liberty rents.

The goal of the initiative — supported by Circles Pittsburgh, East Liberty Development Inc., the Urban Redevelopment Authority and Neighborhood Allies — is to foster East End business owners so they can swim against the upscale tide and begin to build wealth.

Gallery on Penn is a small, grassroots mall where you can buy body butters, aromatherapy products, fashion clothings and accessories, coats for your dog and African crafts, but it also signals a branching out of Circles Pittsburgh.

Circles is a national model that pairs people in poverty with people of means to build relationships that boost the prospects and possibilities of the clients. The person of means is an ally and a source of both know-how and know-who — knowing people who know people being the “in” used by privileged people everywhere.

Circles concentrates on home ownership, money management and strategies for tapping resources, and now, at least in Pittsburgh, on entrepreneurship. Tammy Thompson, executive director of Circles Pittsburgh, said she doesn’t know of any other retail incubators in the Circles USA network.

She said she wanted to bring an extra, one-on-one approach to Catapult’s entrepreneur training to mimic Circles’ approach.

Ms. Worou came to entrepreneurship as a certified nursing and physician’s assistant who returned to school with an interest in holistic healing.

“At [Community College of Allegheny County], one of my professors really nurtured my interest in growing the business,” she said.

“Less than a year in business and I was in a storefront. I never would have imagined it in my wildest dreams,” she said.

Circles Pittsburgh had incubated at ELDI, in fact, before leaving the nest last summer, but ELDI, owner of the Gallery, rents it to Circles at a generous rate, Ms. Thompson said.

“Maelene had had conversations with minority business owners who felt they were not getting enough support, so we saw [Catapult] as a tremendous opportunity,” Ms. Thompson said.

She hired Paramount Co-Op in Ambridge to lead classes and workshops to help Catapult clients strengthen their chops.

Each entrepreneur in the Gallery has a six-month contract that can be renewed, along with additional support as needed, she said. The Gallery is open from 10 a.m. to 8 p.m. Mondays through Fridays and 10 to 6 on Saturdays.

Few minority-owned businesses remain on what used to be the thriving minority-retail thoroughfare of Penn Avenue through East Liberty. When Jamil Brookins died last September, his Jamil’s Global Village, an African cultural arts and crafts boutique, was still hanging in there after 25 years.

When the Gallery opened, Jamil’s expanded into it, a stone’s throw away. Jamil Brookins’ son, Rafiq Brookins, said he goes from one store to the other.

“If someone inquires about our products” at the Gallery, another entrepreneur “calls me and I can just walk up, until I can train one of my family members to do this full time.”

Jamil’s is one of several anchor tenants in the Gallery to help the new business owners with peer support and draw customers.

Lashesia Holliday, owner of Naptural Beauty Supply, was selling hair and skin products online from her home, at trade shows and at business events staged by CCAC, where she is taking business classes, but she didn’t have a strategy for growing.

When I was 19 years old, I decided to take Accutane. I made the decision myself after reading the information on the website https://accisotret.com because I don’t know a good dermatologist, and people who have had experience with this medication.

“Catapult helped me put things together,” she said.

With Naptural, she tweaked the spelling to esteem the natural qualities of black hair, she said.

Ms. Thompson said she has seen the confidence of Catapult clients soar in the nine months since the program was launched.

“Entrepreneurship is empowering,” she said. “Most of these women were terrified, and it is wonderful to see how confident they have become. That feeling will trickle down into everything else they do. It will trickle down to how they parent and it will activate their involvement in the community.”