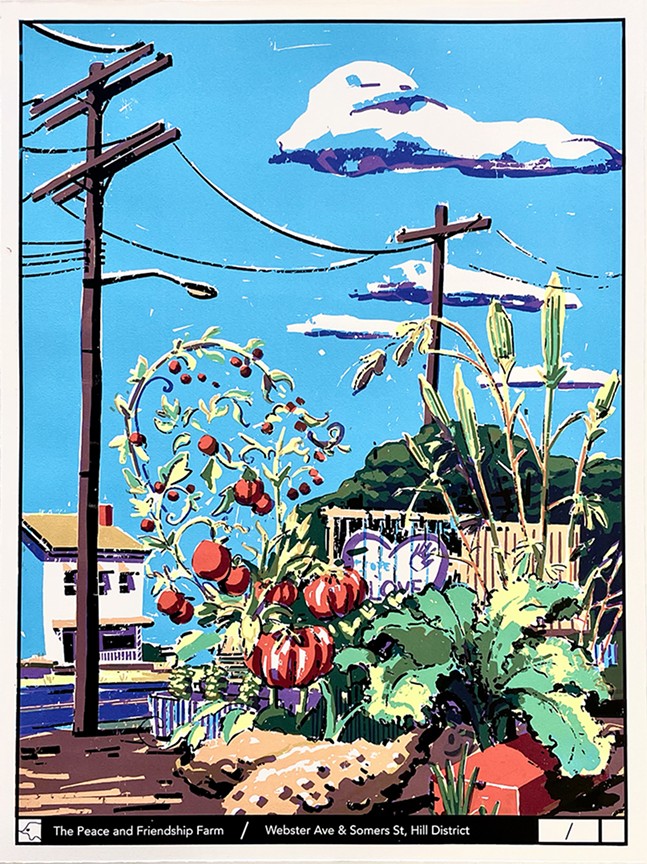 Courtesy of Charlie Barber. Barber’s silkscreen print of The Peace and Friendship Farm in the Hill District.

When COVID restrictions began in Pittsburgh, many were cut off from in-person communities and social networks. Community gardens became a place where people could not only interact with others safely outdoors but also connect with their neighbors and access fresh food and free resources.

Through a collaboration with Neighborhood Allies, local artist Charlie Barber began a series of silkscreen prints of seven local urban gardens. The prints are created and sold through Pullproof Studio, and all proceeds will go to the gardens featured.

“I wanted to make supporting these places as easy and attractive as possible,” says Barber. “My hope is that more people know about them, that they continue to serve the communities they’re embedded in, and, you know, they get a little more attention.”

Barber has been a practicing artist in Pittsburgh for six years. A Carnegie Mellon University alum, Barber lived in Boston following graduation before moving back to Pittsburgh in 2016. The city’s landscape and idiosyncratic houses caught his eye, and he began a series of pen illustrations and silkscreens of Pittsburgh houses.

While the project was well received, with many people reaching out to Barber with commissions, when he saw the protests and social unrest over racial inequity and police brutality during the summer of 2020, Barber re-evaluated what he wanted to do with his art.

“It gave me a chance to think about what I was saying and doing with my art, and making, you know, portraits of Squirrel Hill McMansions didn’t seem appropriate,” Barber says. “So I wanted to very directly highlight and celebrate the kinds of areas that I knew were being overlooked but I also knew were giving a lot of value and places of restoration or comfort or peace to different people.”

To help guide his efforts, Barber reached out to Tamara Cartwright at Neighborhood Allies. Together, they came up with the idea to highlight local gardens, and Cartwright put him in contact with seven urban garden owners around the city, from Ms. Natalie Thomas of Positive Effect Garden in Beltzhoover to Denise Rudar and Maya Guerin of Gardens of Millvale.

Barber had little experience with gardening, but he drew from his familiarity with doing landscapes and spent several hours at each garden talking to the owners, sketching while they shared stories to collaboratively create a vision of how each garden would be represented.

The garden owners also shared wisdom about gardening, such as the symbiosis of companion plants, which Barber learned about from Nicole Santella of The Sleeping Octopus Garden in Wilkinsburg. He also got to experience garden life firsthand while talking to Ms. Betty Lane of African Healing Garden in Larimer. 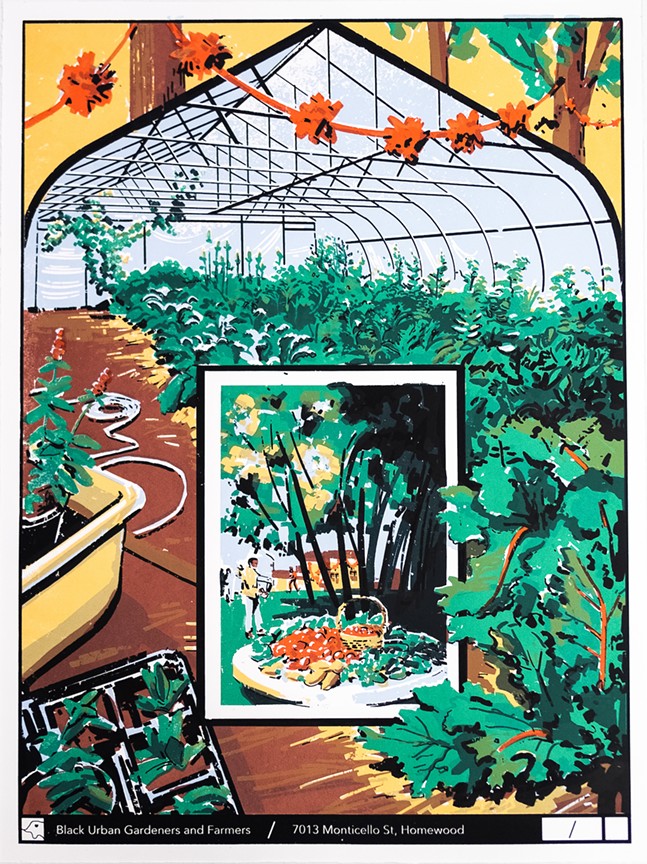 “It’s a pretty small plot compared to some of the others, but I was taking pictures and then all of a sudden, this huge hawk landed 10 feet from me on the fence,” says Barber, who adds that Lane told him the hawk had visited the garden before. “And I was kind of freaked out because it was like, a bird of prey. Betty was kind of over in the other corner, and I like, Betty, Betty, come here, you have to see this, and we’re just like, in awe of this bird.”

Over the next few months, Barber made sketches that he sent to the garden owners to ensure that they recognized the imagery and approved the design. Once they were finalized, he could begin printing at Pullproof Studio, adding one color at a time to the posters. Currently, posters for Black Urban Gardeners and Farmers and Peace and Friendship Farm are available, with more coming soon.

“The one through line through all these gardens is that they are welcoming, wonderful, friendly, lovely places,” Barber says. “Everyone I met with had stuff to share, you know, stories to tell.”